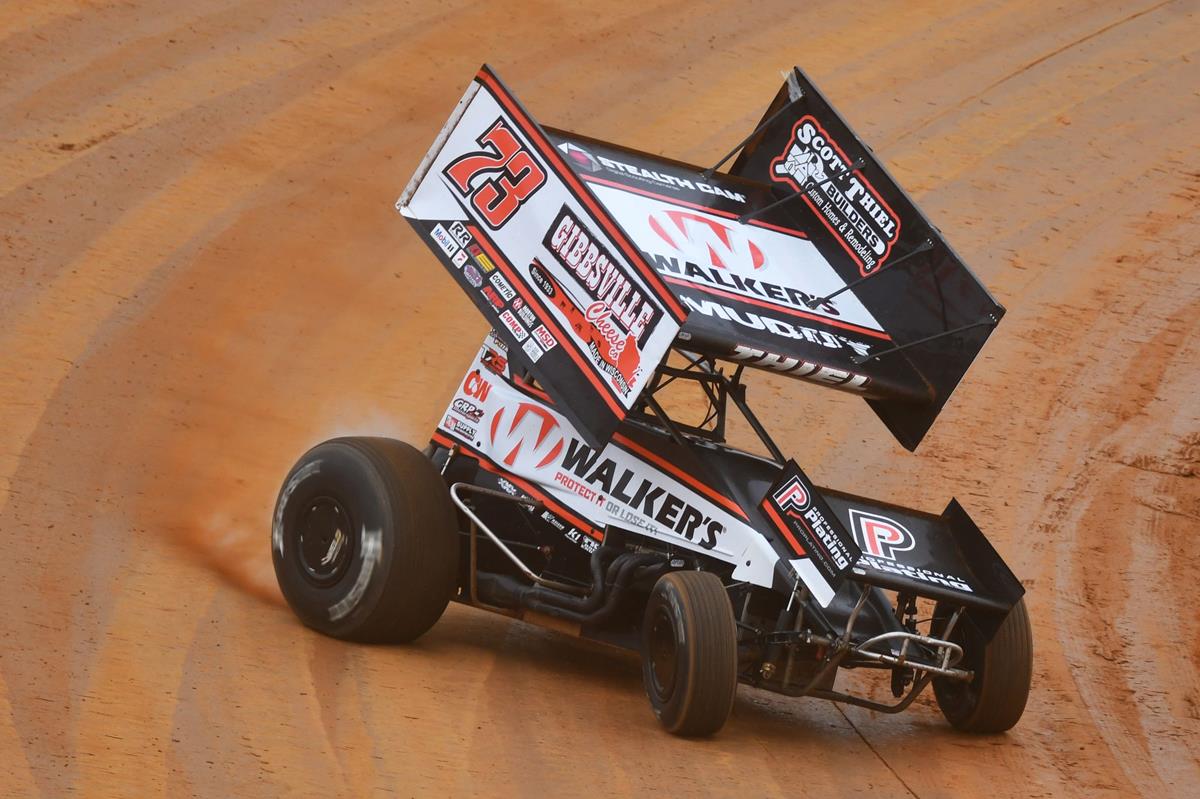 SHEBOYGAN, Wis. (June 13, 2022) - Nearly capturing his third IRA Outlaw Sprint Series victory of the 2022 season, the “Big Wheel” Scotty Thiel and Team 73 were on the move Saturday night at the always-exciting Fairbury Speedway in Fairbury, Illinois, but a late race groove miscalculation forced the Sheboygan, Wisconsin, native to take a seat in second.

A late-race restart with nine circuits remaining gave Thiel the chance to capitalize on race leader Ryan Bunton, but his choice to use the bottom groove versus the top allowed eventual winner, Joe B. Miller, to drive by each of them, railing the cushion to maintain momentum on an ultra-fast and racey Fairbury surface. Thiel would eventually get by Bunton for second, but it was too late to catch Miller.

“I’m a little disappointed in myself for not moving around late in the race at Fairbury. I think we had a car that was very capable of winning. But, we’ll learn from that and move on,” Scotty Thiel said, driver of the Gibbsville Cheese, Walkers Game Ear, Professional Plating Inc, Scott Thiel Builders, Stealth Cam, Muddy Outdoors, Complete Water Inc, KSI Supply, GRP Motorsports, Racers Hall, Triple X Chassis, No. 73 sprint car. “Hats off to my team. They work hard and refuse to give up, even when poor luck steps in and interferes. We have a big weekend coming up at Beaver Dam. We’ll do what we can to get a win for the home crowd.”

Despite his attempts to double-up with another podium run the following evening at Angell Park Speedway in Sun Prairie, Wisconsin, Thiel ran into some poor luck, actually losing a fuel nozzle line while leading the evening’s main event. Thiel would eventually return, but a broken shock bolt would ultimately end his night.

ON DECK:
The “Big Wheel” Scotty Thiel and Team 73 will continue their 2022 campaign with the Jim "JB" Boyd Memorial at Beaver Dam Raceway in Beaver Dam, Wisconsin, on Friday and Saturday, June 17-18. The World of Outlaws weekend doubleheader will award a total winner’s share equaling $30,000; $10,000 on Friday and $20,000 on Saturday. Thiel is a recent winner at Beaver Dam Raceway, scoring an IRA triumph on Saturday, April 23.

SEASON HIGHLIGHTS:
Scotty Thiel and Team 73 capped three-race Central PA visit with a tenth-place run at Port Royal Speedway on Sunday, March 20. Earned first win of 2022 during IRA Outlaw Sprint Series start at Beaver Dam Raceway in Beaver Dam, Wisconsin, on Saturday, April 23. Won second feature of season during IRA Outlaw Sprint Series visit to Sycamore Speedway in Sycamore, Illinois, on Saturday, May 7. Finished third with All Star Circuit of Champions at Plymouth Dirt Track in Plymouth, Wisconsin, on Saturday, May 21. Rallied from 19th to eighth in Sunday night visit to 141 Speedway in Maribel, Wisconsin, on May 30. Finished second during IRA action at Fairbury Speedway in Fairbury, Illinois, on Friday, June 10.