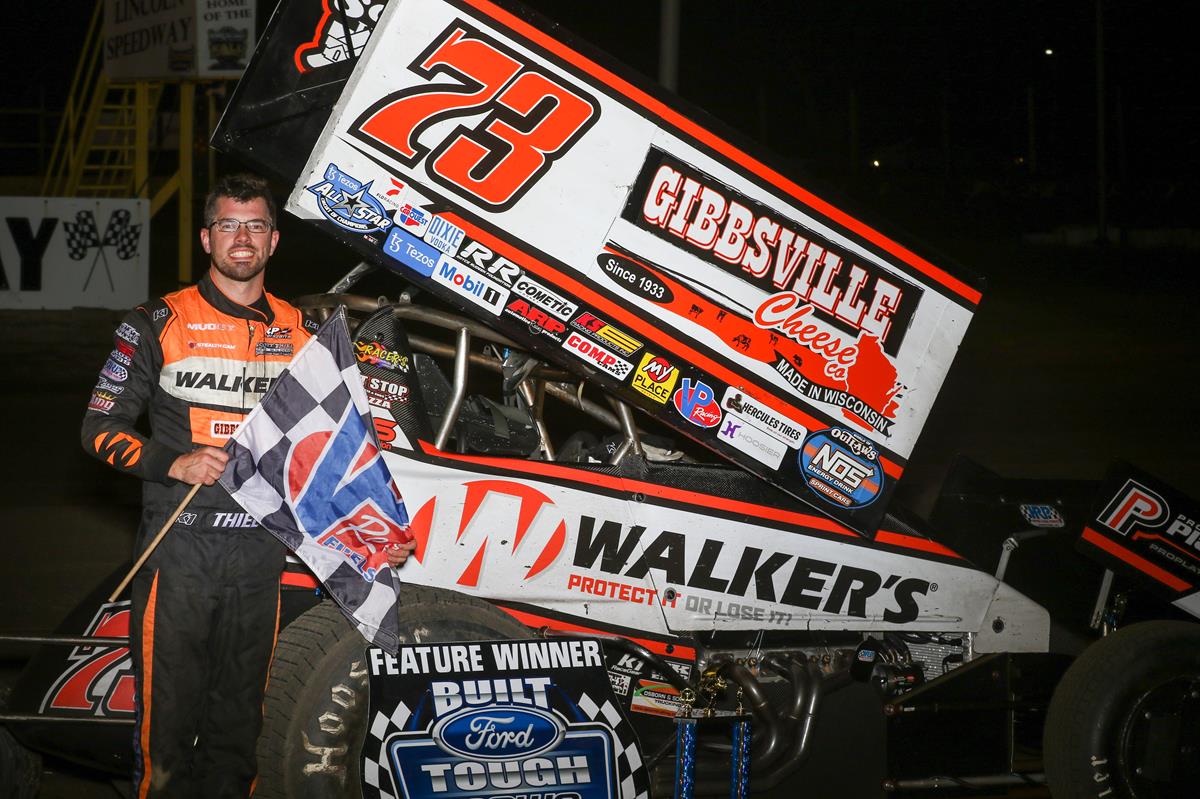 SHEBOYGAN, Wis. (August 22, 2022) - It was a wild weekend in the Midwest for Scotty Thiel and Team 73, and although their three-race campaign ended on a sour note, forced to settle for a DNF during IRA action at Angell Park Speedway on Sunday, August 21, the “Big Wheel” out of Sheboygan, Wisconsin, had his fair share of successes including a MOWA Sprint Car Series victory at Lincoln (Ill.) Speedway on Friday, August 19.

The win, Thiel’s third of the season and first against the Midwest Open Wheel Association, commenced from the front row, leading every circuit of the curfew and weather-induced 15-lap program for a $2,000 payday.

Although not resulting in victory, Thiel’s outing against the IRA Outlaw Sprint Series at Wilmot Raceway on Saturday, August 20, was just as impressive, eventually capping the evening with a hard-fought charge from 19th to finish fourth, battling as high as third before settling one spot back. Thiel was forced to start 19th after spinning during his respective heat race, unable to recover and having to settle for seventh at the finish. The evening’s B-Main was ultimately canceled allowing Thiel to start from row ten.

As mentioned, Thiel’s weekend eventually ended with a DNF at Angell Park Speedway in Sun Prairie, Wiconsin. A close battle for the lead with Jack Blackhurst ended in contact on the final circuit; front end damage forced Thiel to spin into the infield.

“Pretty disappointed with how things ended last night, but to kick-off the weekend with a win makes things a little easier to swallow. We still have a lot of racing left on our calendar, so we’ll get that one back eventually,” Thiel said of his DNF at Angell Park, driver of the Gibbsville Cheese, Walkers Game Ear, Professional Plating Inc, Scott Thiel Builders, Stealth Cam, Muddy Outdoors, Complete Water Inc, KSI Supply, GRP Motorsports, Racers Hall, Triple X Chassis, K1 Race Gear, HRP, King Racing Products, Keizer Wheels, No. 73 sprint car. “Hats off to my crew and everyone involved. It was a long weekend, but we were able to put together some great results and I’m proud of our accomplishments. We have an off weekend coming up, but we’ll get right back at it after that.”

ON DECK:
The “Big Wheel” Scotty Thiel and Team 73 will enjoy an off stretch before returning to competition over Labor Day weekend.