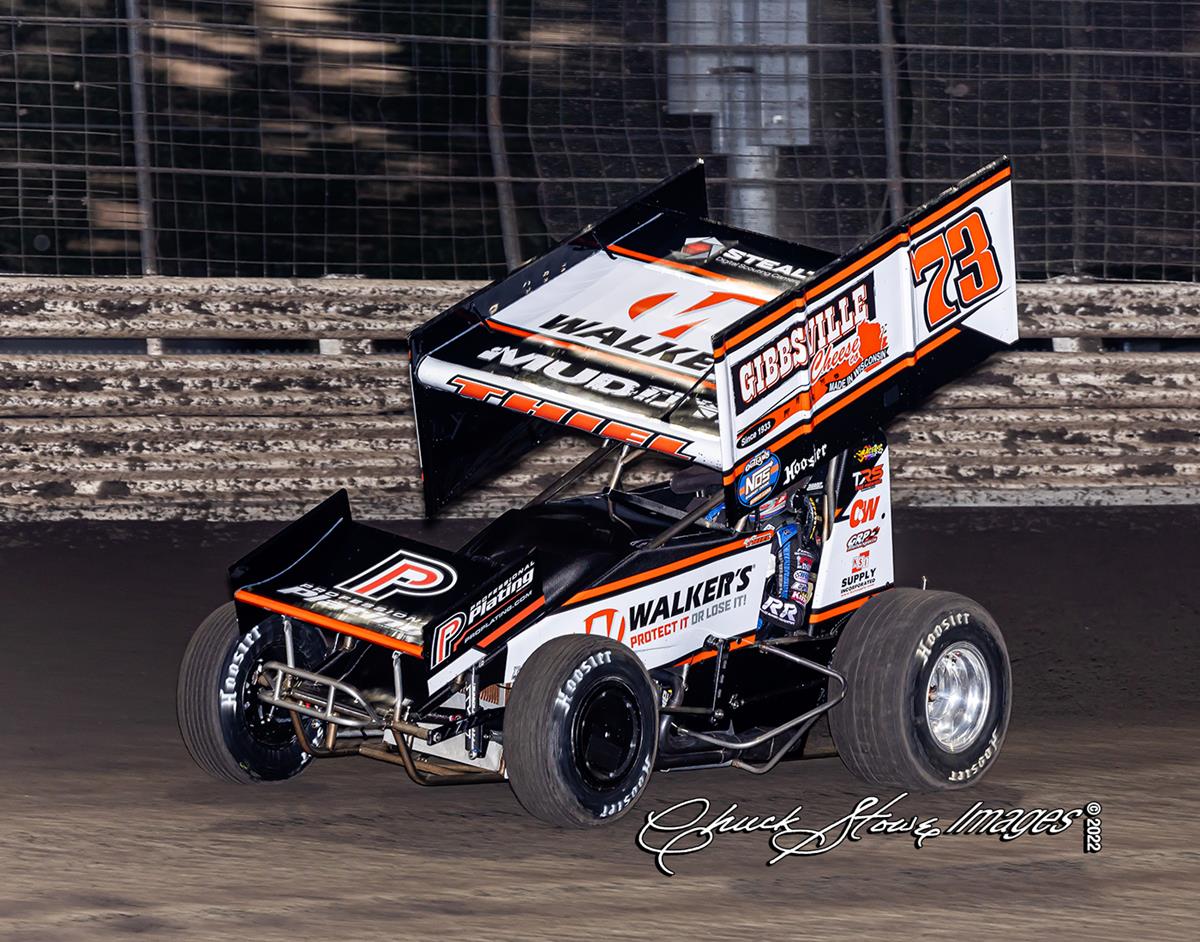 SHEBOYGAN, Wis. (August 15, 2022) - It was a long, competitive week for the “Big Wheel” Scotty Thiel and Team 73, and although the Sheboygan, Wisconsin-based open wheel team did not qualify for Knoxville Raceway’s coveted Knoxville Nationals A-Main, the effort to get there was strong, eventually capping the four-day affair with a C-Main start in Saturday’s Nationals finale, opening their week in the Hawkeye State with an 18th-place finish in Wednesday’s preliminary.

Thiel, driver of the Gibbsville Cheese, Walkers Game Ear, Professional Plating Inc, Scott Thiel Builders, Stealth Cam, Muddy Outdoors, Complete Water Inc, KSI Supply, GRP Motorsports, Racers Hall, No. 73 sprint car, kicked-off his preliminary effort with the 39th-fastest time of 51 entries, racing on to win his respective heat race shortly thereafter. With all of his preliminary results calculated, and after Thursday’s preliminary program was completed, it was concluded that Thiel’s overall point total was short of a Nationals A-Main and B-Main bid forcing a “Hard Knox” start on Friday. The “Big Wheel” went on to conclude Friday’s “Hard Knox” in the B-Main, setting the stage for Saturday’s C-Main appearance.

“It’s the toughest week of the year. We did everything we could to get ourselves locked into Saturday night, but we’ll take this and move on…that’s all you can do,” Thiel explained, a two-time IRA feature winner in 2022. “Hats off to my guys for their hard work and determination. We still have a lot of racing ahead and we’re excited to keep it going.”

ON DECK:
The “Big Wheel” Scotty Thiel and Team 73 will continue their 2022 campaign with the three-day Jackson Nationals at Jackson Motorplex in Jackson, Minnesota, on Thursday through Saturday, August 18-20.

SEASON HIGHLIGHTS:
Scotty Thiel and Team 73 capped three-race Central PA visit with a tenth-place run at Port Royal Speedway on Sunday, March 20. Earned first win of 2022 during IRA Outlaw Sprint Series start at Beaver Dam Raceway in Beaver Dam, Wisconsin, on Saturday, April 23. Won second feature of season during IRA Outlaw Sprint Series visit to Sycamore Speedway in Sycamore, Illinois, on Saturday, May 7. Finished third with All Star Circuit of Champions at Plymouth Dirt Track in Plymouth, Wisconsin, on Saturday, May 21. Rallied from 19th to eighth in Sunday night visit to 141 Speedway in Maribel, Wisconsin, on May 30. Finished second during IRA action at Fairbury Speedway in Fairbury, Illinois, on Friday, June 10. Finished 13th and 14th in the World of Outlaws doubleheader at Beaver Dam Raceway on June 17-18. Finished ninth with IRA at Plymouth Dirt Track on Thursday, June 30, then finished eighth and sixth against the World of Outlaws Sprint Car Series in Cedar Lake Speedway’s Independence Day Spectacular on Friday and Saturday, July 1-2; career-high finishes against Greatest Show On Dirt. Earned third-consecutive World of Outlaws top-ten with seventh-place score at Wilmot Raceway in Wilmot, Wisconsin, on Saturday, July 9; he started from the pole. Finished seventh in Knoxville Raceway start on Saturday, July 16. Finished fifth with IRA at Langlade County Speedway on Saturday, July 30. Qualifies for Knoxville Nationals C-Main.